Grateful families are giving back and making a difference. Learn more. 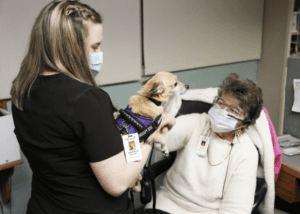 “We are thrilled to have additional therapy dog teams visiting us every week,” said Jenni Powell, manager of volunteer services at Mercy Fort Smith. “We began the therapy dog program last year and saw significant benefits. The dogs really brighten everyone’s day and help bring a sense of calm to those who need it most.”

Faith Walker is a student at the University of Arkansas at Fort Smith and a full-time nanny. When she first heard about Mercy’s therapy dog program, she knew it would be a great opportunity for herself and her dog, Honeybun. The 8-year-old long-haired Chihuahua has been Faith’s emotional support animal for several years and is a familiar face at the university. Now, the two try to visit the hospital at least once a week and often arrive during shift changes. They generally visit hospice and the pharmacy team and stop by labor and delivery and the emergency room.

Volunteer Kaley Moore, an assistant coach for the Southside High School girl’s basketball team, brings therapy dog River to the hospital regularly. River is a 2-year-old Great Pyrenees-Australian shepherd mix. Kaley also teaches biology and a credit-recovery class and oversees virtual learning at Southside. A student once told her he would want to come to school every day and do his work if there was a dog in the classroom. Her interest in therapy dogs further took root after she learned more about Mercy’s program. She signed up soon afterward, and River began his therapy-dog training. The pair has been visiting the hospital on Sundays; Kaley is hoping to expand the visits to a couple of days each week. “He loves it; he’s awesome at it,” Kaley said of River. “I definitely think dogs make everything better.”

Debbie and Larry Wright recently began bringing therapy dog Lola Belle for hospital visits. Their team received certification around Christmas, and they have been visiting the hospital about once a week since then, stopping by as many departments as possible. Debbie’s mother was a patient at Mercy when Debbie first met therapy dog Baxter. Like Baxter, Lola Belle is a cavalier King Charles spaniel. While visiting Baxter, Debbie thought, “I bet Lola Belle could do that.” The couple then got in touch with Mercy to begin the therapy dog certification process.

Baxter’s handler, volunteer Robert Mercer, said calm, controllable dogs are a good fit to serve as therapy dogs. Dogs should be receptive to strangers, not prone to nipping or barking and non-reactive to other dogs. Robert assists in getting the dog trained and certified as a therapy dog, while Jenni works with the dog’s caretaker on the volunteer side. The Alliance of National Therapy Dogs vouches for the dog following the certification process. Because both dog and handler are one team, both are signed up as volunteers. The therapy-dog certification process takes several months.